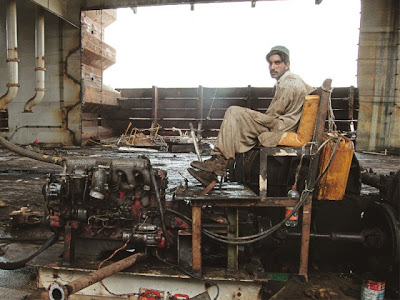 The Gadani shipbreaking yard is the world’s third largest such enterprise. Stretched across a 10 km long beachfront, it is about 50 kilometres northwest of Karachi.

In the 1980s, Gadani was the largest ship-breaking yard in the world. Since then, competition from newer facilities in India and Bangladesh has led to a significant reduction in its output.

Over one million tons of steel is scavenged here each year. Still, there are no personal or environmental safety precautions. Fifteen thousand impoverished Pakistanis risk their lives every day, tearing down ships in the sun.  They earn as little as Rs400 a day. About 70% of these workers, who include helpers, welders, crane operators and cleaners, come from Khyber-Pakhtunkhwa.

Working in this graveyard of ships is a gruelling and dangerous job. By some assessments, it is the world’s deadliest job. Labourers tear down the ships piece by piece, working with chemicals such as mercury or lead, without safety equipment such as helmets, gloves, belts or fire-retardant clothing.

Plans to ensure ships are recycled in EU-approved facilities worldwide have been backed by the European Parliament.

However, MEP’s voted against an Environment Committee proposal for a recycling fund financed by a levy. But it did call on the European Commission to propose plans for an incentive-based system before the end of 2015.

In order to reduce damage to the environment and human health, EU ships will need to be recycled in EU-approved facilities.

The European Parliament rejected the idea of a recycling fund levy put forward by Green MEP Carl Schlyter by 299 votes to 292 with 21 abstentions.

However, MEPs adopted an amendment calling on the European Commission to table a legislative proposal before the end of 2015 “for an incentive-based system that would facilitate safe and sound ship recycling.”

Carl Schlyter said: “While the European Parliament has voted to put an end to European ships being recklessly scrapped in developing countries in hazardous conditions, this is jeopardised by the failure to adopt a financial mechanism to support it.

“It is very frustrating that a narrow majority succumbed to highly misleading lobbying by the maritime sector, seeking to shirk its responsibilities, and voted down the proposed financial mechanism that would have made safe ship recycling competitive.”

Discussions with EU ministers on a first-reading towards implementing the amended proposals will begin in May.

Source: scrap-ex. by Paul Sanderson. 22 April 2013
http://www.scrap-ex.com/news/metal/european_parliament_scraps_idea_ship_recycling_fund_financed_levy.html
Posted by Tridib at 11:16 AM No comments:

The European Parliament has approved of plans to clean up the scrapping of old ships to ensure the materials are recycled in EU-approved facilities worldwide.

The draft regulation aims to reduce the adverse effects of careless scrapping, such as accidents, injuries or damage to human health or the environment, by steering EU ships toward EU-approved facilities.

The Parliament did not endorse an Environment Committee proposal for a recycling fund financed by a levy, opposing it by a narrow 299 votes to 292, with 21 abstentions, but it did call on the European Commission to propose plans for an incentive-based system before the end of 2015.

Source: JOC. 18 April 2013
http://www.joc.com/maritime-news/ships-shipbuilding/parliament-drafts-eu-ship-scrapping-regulation_20130418.html
Posted by Tridib at 11:10 AM No comments:

Shipowners "Not Lying" About Scrapping Scheme

The Danish Shipowners' Association has denied accusations that it, along with other lobbyists, lied about factual matters in their opposition of a proposed ship scrapping levy, industry news site ShippingWatch reports.

The European Parliament recently voted down a proposal by Swedish member Carl Schlyter to stop unsafe scrapping practices, which included plans for a scrapping fund that would be paid for through a levy on ships using European ports.

After the plan was defeated, Schlyter filed a complaint accusing ship owners' groups of using false arguments in lobbying against it, but the industry says it used the same data that Schlyter did in calculating the costs of the fund to shipping companies.

"We used the numbers that formed the basis of Schlyter's own consequence analysis for this area, as well as for the final proposal, which was 0.05 Euros per GT per port call," said Maria Bruun Skipper, chief consultant at the Danish Shipowners' Association.

"We've calculated specific examples based on his numbers and, for instance, we've looked at the expenses for a RoRo ship sailing between European ports, a large ocean going container carrier, and a ferry."

The shipowners and ports lobying against the port levy believed it would mean substantial additional expenses, something which Schlyter denied, and argued that the fund would help stop unsafe scrapping practices.

"Hopefully, we can put a stop to the absolute majority of vessels being scrapped on beaches in Bangladesh, which is damaging to both humans and the environment," he was quoted last month as saying before the vote.

But ship owners' groups, including the Asian Shipowners' Forum (ASF) responded that the proposal might undermine the Hong Kong convention, an effort to address scrapping issues on a global basis that has not yet been ratified.

"The global implementation of the Hong Kong Convention is the only way to overcome problems of the recycling industry," the ASF said.

The European Parliament is still considering other proposals for scrapping requirements.

Source: EMEA News. 26 April 2013
http://shipandbunker.com/news/emea/206403-shipowners-not-lying-about-scrapping-scheme
Posted by Tridib at 11:09 AM No comments:

ASTORIA — A company has proposed a shipbreaking operation at the Port of Astoria to cut apart and recycle vessels, members of the port’s governing board revealed before cutting short a public discussion.

The port’s commissioners had a discussion of the proposal on the agenda for a Tuesday meeting, The Daily Astorian reported .

The site is at North Tongue Point, a former military facility that has been proposed before for recycling vessels.

Commissioners said the company approached it with the idea of take ships out of the water to recycle the metal.

Objections to potential problems such as from hazardous materials used in ship construction have thwarted previous shipbreaking projects in Oregon.

In 1999, when the Division of State Lands owned North Tongue Point, a Seattle company that was leasing part of the waterfront facility prepared it for a potential military ship dismantling operation.

The plans foundered after Sen. Ron Wyden urged the Navy and a federal agency not to award contracts to bidders with significant worker safety and environmental records.

Seven years ago, the state’s economic development agency recruited a shipbreaking operation to Oregon, but under criticism from environmentalists and political rivals, Gov. Ted Kulongoski withdrew the invitation. An aide at the time suggested the state would take another look at a proposal if it involved taking ships out of the water, a more expensive procedure.

The Daily Astorian reported that shipbreaking has boomed recently, taking advantage of the downsizing of older, unprofitable vessels in the hard-hit shipping industry.

“I don’t want to talk about it,” said Commissioner Floyd Holcom, reminding other members that the port had a nondisclosure agreement with the company.

Efforts to contact the company identified in commission documents as Portland-based Blue Ocean Environmental were unsuccessful.

Source: register guard.  19 April 2013
http://www.registerguard.com/rg/business/29746963-67/port-company-shipbreaking-astoria-commissioners.html.csp
Posted by Tridib at 11:06 AM No comments: